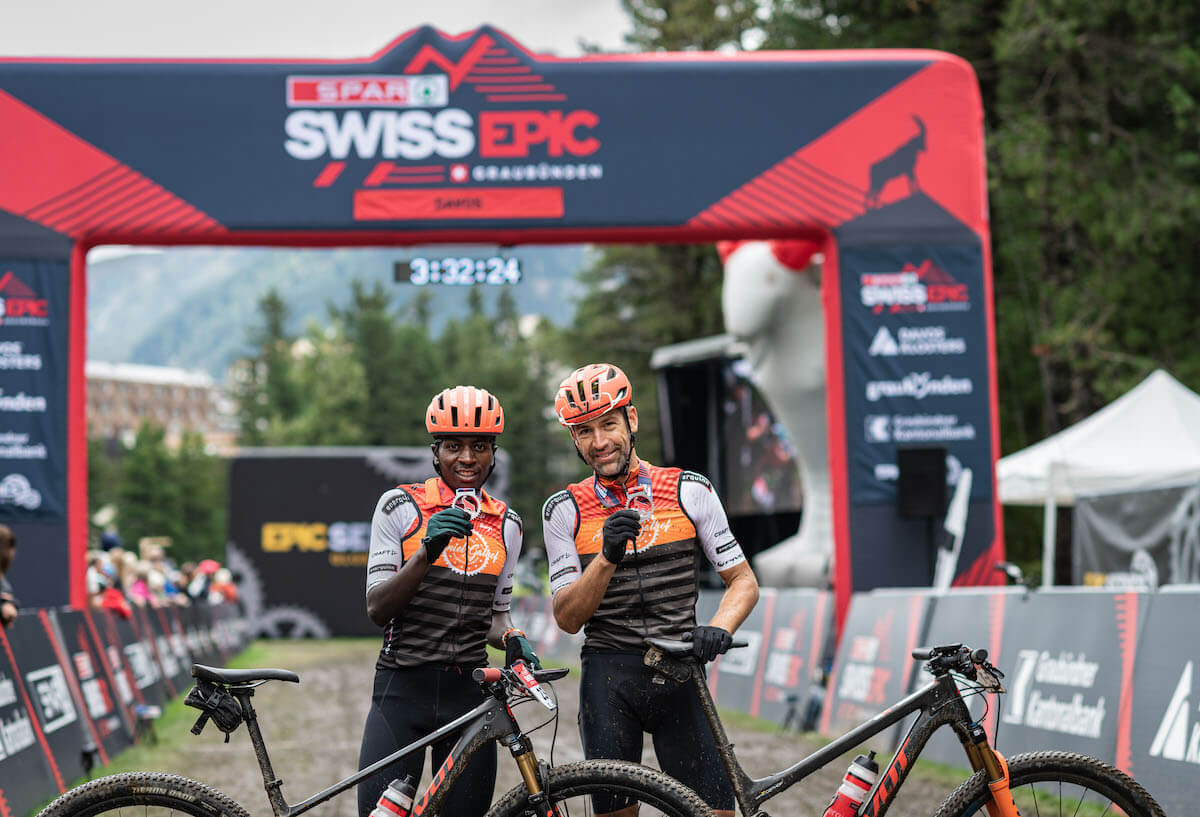 Our ambassador, Daniel Gathof took on the Swiss Epic last month. This the story of how Daniel and Didier took on the mountain bike stage race through the Swiss Alps.

From the land of a thousand hills to the Swiss Alps

The famous Swiss Epic, a race in which I had wanted to participate for a long time. With its five days of fantastic trails and the highest peaks in the region Graubünden, it is one of the top stage races in the calendar of a mountain biker. The race is a team race, as is often the case with mountain bike stage races and it belongs to the highest category of the world rankings. Given the event’s prestige, the fact that the competitive aspect of the race would take a backseat was not part of the initial plan. However, finding a suitable partner turned out more challenging than anticipated. So, I decided to offer the chance of a lifetime to a cyclist from Rwanda.

Didier Munyaneza, coach at the Twin Lakes Cycling Academy and one of the best road cyclists in his country, was invited and joined me at short notice. I got to know the Twin Lakes Cycling Academy in March when I participated in the Rwandan Epic. Its genesis and purpose is heart-warming – Providing formerly homeless children with a bicycle and home does not just allow them to return to school, but enables them to get an education and a future beyond life on the streets.

The founder of the Academy, Florent Nsengumuremyi had lost his entire family in the Rwandan Genocide 28 years ago and found himself alone on the streets at the tender age of 7. Thanks to a bicycle, he was able to attend school and with that, find strength and stability in his life. The Twin Lakes Cycling Academy is his payback to Rwandan society. At the same time, it has been a goal of mine to help MTB gain traction in the country as the potential is huge in Rwanda. Didier is also eager to transition from road racing to mountain biking. This transition will give him a bigger chance to make it to a world championship event or even to the Olympics, which, in turn, would help the Academy get exposure and more support.

A bike for Didier was quickly organised but getting the necessary visa proved was much more challenging. Fortunately, a call to the president of Rwandas cycling federation helped shorten the wait time from three months to three days and Didier was on a plane. To get Didier acclimated, I had him signed up for a quick race in the Black Forest upon his arrival. It was his third time on a mountain bike! This adventure was followed by a few days of technical training, and we found ourselves at the starting line of the Swiss Epic in Arosa.

As ranking points were awarded up to position 30 in the race, the goal was clear. This was not an easy endeavour in a field of world-class athletes. Especially when it was time to negotiate 15 km of steep downhill trails. Despite two weeks on the bike, technique and practice were still lacking, and the racing trails in Switzerland are extremely challenging, even for experienced riders. This said, Didier mastered each leg of the race confidently and, above all, accident-free.

Our strategy was slightly different from the one usually employed at MTB races. I often sent Didier ahead up the mountain. He is made for the climb uphill as he has a large ‘engine’ and is used to high altitudes. As opposed to me, who would catch up with him and guide him on the downhill trails. To avoid putting too much pressure on Didier, I tried to forget that we had a race number on our handlebars and taught him on the go. Giving tips about braking, choosing the best route, and seating himself on the bike. Often, however, I just followed him quietly as that seemed to make him more secure and faster. The impressions of the race and the new environments were often enough to try to process, and keeping my mouth shut was the best course of action in those moments.

Every day, we collaborated a bit better and managed to get downhill more securely and with higher speeds. We usually placed between the 20th and 25th position, which was altogether satisfactory. We achieved our best result with a 21st place. Doing so on what is considered the crown jewel of the race from Flims-Laax to Davos. Which, was also Didier’s first MTB ride in the rain.

The length of this leg was 100 km. The fact that it was more uphill than downhill worked in our favour. This made me hopeful for the last day, which was supposed to be the highlight of the race for us. The course went uphill right after the start and we were ranked 15th at the peak. For the first time, I had the feeling of being in the race. The downhill trails did not seem overly challenging to me, I was confident Didier would have no problems. Unfortunately, there were still many wet roots and the mountains were challenging. We fell down the order slightly.

With a 25th place overall at the end of the five stages, we ended the race well and learned a lot. Didier can be very proud to have captured the first ever ranking points on the world stage for Rwanda. For my family, I, and everybody who met Didier, this time was “grounding.” The differences in living standards, expectations, culture, and general approach to life were eye-opening.

My heartfelt thanks do not only go to Didier, who took the risk and jumped at the challenge, but also to Pivot Cycles for providing a world-class bicycle on short notice. Also, my longtime business partner enerquinn without whom my first visit to Rwanda in March would not have been possible. Squirt Lube receives my gratitude for providing the starting spot at the Swiss Epic and Bikmo for supporting Didier.

It looks like you're outside of the UK
Select a country to view Bikmo products and services tailored specifically for that location.